Overview : The use of bentonite backfill 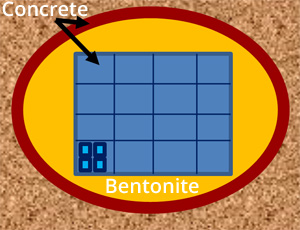 Cross-section through a potential repository tunnel. Here, the cemented waste (light blue) is placed in concrete boxes (darker blue) which are then surrounded by a protective layer of bentonite (yellow). Note also concrete tunnel liners (red), necessary for staff safety during the construction and operational phase.

Bentonite plays a significant barrier role in many radioactive waste repository designs, where it has been chosen due to its favourable properties such as plasticity, swelling capacity, colloid filtration, low hydraulic conductivity and its stability in relevant geological environments.

In some designs, bentonite may be used alongside concrete and this could cause problems in the future. This is because bentonite is unstable at the high pH levels found in leachates from concrete construction materials (e.g. tunnel liners, grouts, etc.) and cementitious wastes in a repository. This fact has led several national programmes to assess alternative construction and sealing materials such as low pH cements.

Recently, it has been assumed that the lower pH (typically pH 10-11) leachates of such cements will degrade bentonite to a much lesser degree than ‘standard’ OPC (Ordinary Portland Cement)-based cement leachates (generally with an initial pH>13). Laboratory experiments are looking into this assumption right now (e.g. Heikola et al., 2013), but these short-term experiments need to be supported by long-term natural analogues which can assess bentonite reaction over thousands to millions of years. 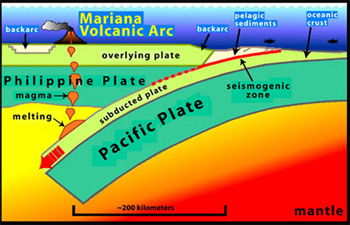 Ophiolites are produced where oceanic plates are dragged down into deep ocean trenches (© US National Oceanic and Atmospheric Administration).

Natural groundwaters with the same pH-range as the low pH cements are found associated with certain igneous rock-types known as ophiolites in many areas of the world. Ophiolites are formed when ancient ocean crust encounters one of the many deep ocean trenches found around the world (in this case, the Mariana’s Trench, the deepest known). Normally, this crust is drawn down into the earth’s mantle where it melts and returns in the form of the many volcanoes which stud the so-called ‘Circum-Pacific Ring of Fire’. However, not all ocean crust is consumed in this fashion, sometimes pieces are ‘scraped off’ the sinking plate and end up exposed on land, as ophiolites.

Reaction of ‘normal’, near-neutral groundwater with the minerals present in an ophiolite produce the natural alkaline (and often hydrothermal) groundwaters which are a common feature of ophiolites worldwide.

Another ubiquitous feature of ophiolites is the presence of bentonite, usually lying on top of the last layer of igneous rock. This serendipitous combination of alkaline groundwaters and bentonite make such areas the perfect natural laboratory to study the long-term reaction of bentonite in an environment almost identical to that in a repository using low pH cements and bentonite together.

In the Philippines, researchers are positively spoiled for choice of where to study as there are 20 known ophiolites (with their associated alkaline groundwaters and bentonites) around the country. 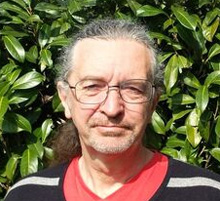 The following files are from our online library